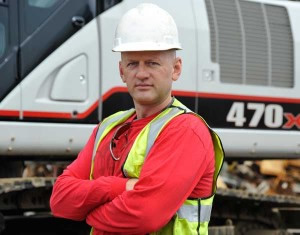 Tibor Petrisin who emigrated from Czechoslovakia in 1993, and found work in demolition as his first American job in the northeast part of New Jersey, felt it was an easy request to go bigger. For the KALO company owner, the decision to go to higher production equipment was by way of a proven smaller version of his current successful equipment. That need just had Petrisin going to his long time dealer, Link-Belt Mid-Atlantic, who not only is well established in his recently relocated vicinity, but is a company who has serviced his machines and supplied parts when working in the very hostile, destructive environment for the past three and a half years.